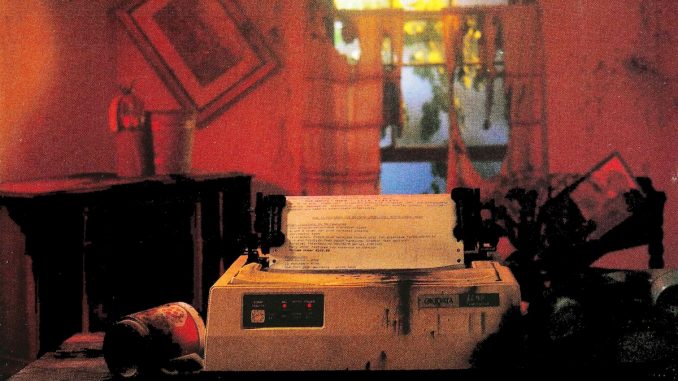 You might have got the impression, upon entering Jane Smith’s house (sometime in 1986) that her husband was in the process of renovating their kitchen, the sound of a power tool growling and grinding away in the background. But you would’ve been wrong. No, what you heard was not the result of some sort of buzz saw or drill but rather the then-ubiquitous noise generated by the household’s 9-pin dot-matrix printer.

It might have been an Epson, an Okidata or a Panasonic – unless you had been around a variety of them it was hard to tell. But what it was was most certainly a printer – no confirmation was necessary. They were loud and distinct, the pins of their print heads hammering through their ribbons and driving ink into the paper trapped below, the act of rendering patterns on tree-pulp also creating unique rhythms you could learn to identify if you heard them enough – “Oh, that’s a book report. That’s a resumé. Oh, that must be a Print Shop banner!” The motors driving the head and the platen would whir and in some models the head would slam into the sidewalls of the printer, as if completing a techno-anarchic drum kit.

Of course, as noisy as this was it was better than the alternative which was, for most people, nothing. While consumer laser printers (such as Apple’s LaserWriter) became available in the mid-1980s they were horribly expensive, costing several thousand dollars. At the lower end were ‘daisy wheel’ printers that couldn’t print graphics, so if you wanted to do anything more sophisticated than what an electric typewriter could produce you were out of luck – little Jenny was likely to be unimpressed if you brought back a printer that wouldn’t work with The Print Shop.

At first daisy wheel printers were more expensive than dot matrix ones due to their ability to print fully-formed ‘letter quality’ characters, but as demand for graphical printing increased, they became cheaper, eventually falling out of the bottom of the market. But how did we get here, to dot matrix vs daisywheel? For that we have to do a little time-travelling, back to the mid-20th century.

Early mainframe computers typically used a ‘line printer’ for output, so named because they printed an entire line of text at one time – not instantaneously but sequentially, unlike a plotter, which moved paper back and forth while setting down a pen at appropriate locations to draw characters individually.

There were five basic designs of line printers. Drum printers, which used a spinning drum engraved with a complete set of characters for each column of the printer’s overall column-width (for example 120 characters wide), had a series of hammers (also one for each column) that struck the paper to print the desired characters as they spun past. This all happened very quickly but made quite a racket, and the timing was not precise and so the characters were often vertically offset from each other, creating jaggy lines.

Chain printers placed the type on a horizontal chain that constantly looped in front of the paper, the hammers behind striking each column as the desired character scrolled past. By repeating the character set on the chain, faster printing could be achieved. These printers were so noisy and fast they could synthesize musical notes given the correct series of characters, and be played as instruments!

Bar printers were similar to chain printers but instead had a metal bar, engraved with characters, that moved left and then right, rather than looping like the chain. That leaves us with comb printers and wheel printers.

Wheel printers had a character wheel for each column; the wheels would spin until every character in the line of text was in place, then a series of hammers would render the entire line (likely progressively so they did not contact each other and jam). Finally, comb or ‘line matrix’ printers are similar to dot matrix printers in that, rather than using solid type, they form characters using an array of dots. However, instead of a moving head there is a line of hammers that spans the entire width of the paper, and for each row in the combined matrix of all the characters on the line, the appropriate hammers strike the ink ribbon and paper, rendering a line of dots before the paper advances. Line matrix printers are still in use today, in industrial applications where paperwork needs to be printed as quickly as possible.

Both wheel and comb printers evolved into respective consumer versions that used a horizontally moving head which printed only one character or only one fraction of a character at a time – dot matrix and daisy wheel. Initially both of them were very expensive, either type costing upwards of US$1000 in 1980 (over US$3000 today!) The high cost of printers likely drove the desire of Steve Wozniak and others to create computers that used a television set as an output device – these being much cheaper.

But as the market for home computers increased during the early 1980s, so did the market for printers – once consumers warmed to the idea of word processing as an alternative to the traditional typewriter, and products such as The Print Shop provided additional excuses for owning a printer. Printer manufacturers geared up production and a price race to the bottom began for those wishing to target the lower-end of the market.

The demand to print graphics won out over the desire to print ‘letter quality’ text and the dot-matrix printer conquered the market, becoming a common fixture in homes and schools.

Another advantage dot-matrix printers had was that, while with daisywheel printers you had to change the glyph wheel in order to change the typeface, characters printed by dot-matrix models were generated by software inside the the printer itself. This meant that in order to compensate for the lower quality of the characters, they could provide several typefaces, including Courier, Sans-Serif and compressed fonts.

Some models of 9-pin printer would print each line twice, offsetting the print head slightly the second time, and smoothing out the text. But the ultimate solution to the print-quality issue came with the introduction of 24-pin printers, whose print heads of typically two rows of 12 pins provided much nicer output – enough so that the remaining daisywheel printers in use were soon consigned to history.

Dot matrix had seemingly won the day. But its victory would be short-lived: while the cost of laser printers remained relatively high, in the 1990s a new competitor arrived on the scene: the inkjet printer. The inkjet had an advantage dot-matrix printers just could not match – colour.

While dot-matrix printers did have coloured ribbons available, they was usually limited to three or four discrete colours – useful for a bit of coloured text or mono-coloured clipart but not for reproducing photographs.

However, inkjet printers could reproduce the entire colour spectrum. And with digital cameras beginning to emerge this was a huge selling point. Everybody wanted colour! Dot-matrix printers were suddenly passé. And inkjets were so ‘affordable’, with manufacturers selling printers below cost in order to suck people in.

But consumers soon realised inkjet printers had their own problems: the print heads frequently clogged, and users would get frustrated by their fruitless attempts to unclog them. Ink cartridges were (and still are) expensive, with ink costing up to US$2100 a litre. Ouch!